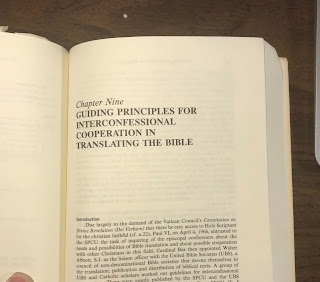 In 2011 Wycliffe Bible Translators were growing uneasy with the concept of computers replacing Bible translators.[1] With advances in Bible translation software came the reality that machine intelligence was replacing human Bible translators. Their concern was indeed valid—from 2000-2010 Wycliffe software engineers were completing work on two Bible software packages to speed up the digitization of Bible translation. They created “Fieldworks,” a software to be used by the missionary or linguist for inputting linguistic information. Fieldworks then accesses its “Language Explorer” to create four functions for the newly written language: Lexicon, Interlinear, Bulk Edit, and Grammar. Fieldworks then facilitates formatting, back-translating, error-checking, and exporting the final product. Once the Fieldworks phases are complete, the new Bible translation can be imported into “Paratext.” Paratext is the United Bible Society’s (UBS) proprietary software for all present and future Bibles that it publishes.[2]
Simultaneously the field of linguistics is exploding. Funded by the National Science Foundation, Eastern Michigan University partnered with Stockholm University to develop a Linguist List Map and MultiTree projects, now overseen by Indiana University. Wycliffe’s Summer Institute of Linguistics runs www.ethnologue.com, a website containing information on “7,097 known living languages,” categorized as either Institutional, Developing, Vigorous, In Trouble, and Dying. Beginning with 19thCentury Protestant missionaries, Bible translation is now facilitating linguistic analysis of all the languages of the world.
But who controls the ethereal realm of the digital Bible? To gain an understanding of the complex web of cooperative agreements, we look back 50 years.
In 1968 the United Bible Society (UBS) was 24 years old. The UBS served to unite many major worldwide Bible Societies after World War II. Prior to that time these Bible societies cooperated on the basis of networks of comity agreements forged on the mission fields of the world in the 19thCentury. However, the 20thCentury ushered in an ecumenical wave. It was truly the “Great Century of Ecumenism.” The World Council of Churches organized in 1948. John XXIII announced the Second Vatican Council in 1959. A new day of Christian cooperation reigned in Western Christianity—especially impacting mainline Protestant and Orthodox churches, and a group of Roman Catholic leaders.
Meanwhile, within Evangelical Christianity, the Bible reigns supreme. The Bible and its translation informs and edifies both the Evangelical theologian and practitioner. The hearts of the trained and untrained are fed by the words of the Bible—as translated. God speaks through His words—as translated. The “nerve center” of Evangelical Christianity is Bible translation. In these past two centuries Bible Societies have exerted important oversight over Bible translation, publication, and dissemination.
It all started in 1802 when the Bible Society Movement was conceived in the Board Room of the Religious Tract Society in London. On February 1, 1803, the British and Foreign Bible Society (BFBS) was launched, its rules were adopted, and it became an official organization. Seventeen years later, in 1820, it reported, “The Auxiliaries of the Society itself amount to 265, and the Branch Societies to 364; forming together a total as of last year, of 629.”[3] The BFBS had grown exponentially as Evangelical Christians worldwide resonated with its Great Commission purpose of Bible distribution for the purposes of evangelism and discipleship.
Fifty years ago, in 1968, the modern Bible Society movement was 165 years old. Also in 1968, the United Bible Society (UBS), a different organization, was 23 years old.
In its 24thyear, the UBS became one of two official signers of the 1968 Guiding Principles for Interconfessional Cooperation in Translating the Bible. The other signer was the “Secretariat for Promoting Christian Unity” (SPCU). The SPCU was founded on June 5, 1960 by the Catholic Church. The Dutch cardinal, Augustin Bea, assumed its first presidency. The SPCU was organized for Catholics to participate in activities surrounding the “Great Century of Ecumenism.”
The Second Vatican General Council was called on Jan 25, 1959 and held its first meeting on October 11, 1962. However, the SPCU could not wait for Vatican II’s ecumenical decrees to begin its work. Four years after the founding of SPCU, on September 14, 1964, three mechanisms for ecumenical cooperation “were approved and promulgated by the Pope”:


Even while significant spiritual gains have coincided with the advent of Bible digitization, the advent of Bible software created administrative vacuums which were being filled following the above “Guidelines.” The long-term impact of these “Guidelines” may not benefit the ongoing proliferation of Evangelicalism.[9] Surely the missional advice of Jesus applies to an analysis of biblical digitization:

“Behold, I send you out as sheep in the midst of wolves. Therefore be wise as serpents and harmless as doves.” Matthew 10:16.