On the Very Words of the Bible: Experiencing God's Holy Presence in the Midst of Conversation! 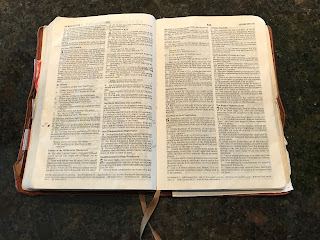 In the past several weeks of evangelism we have encountered the special presence of God entering evangelism conversations when the Bible has been opened. These past two Thursdays I have partnered in initiative evangelism with a Midwestern student named D. J.
On both Thursdays something similar happened. I engaged a person in a gospel conversation. Typical questions came off my tongue:


Moving from these questions conversations either proceeded toward Jesus and the gospel or came to an end. My goal is threefold:


Something noteworthy happened these past two weeks. When I was at the point of concluding a conversation that was becoming unfruitful, D. J. asked a question:


In both cases the individual said, “Yes!” Thereupon, D. J. opened his Bible and showed them a verse that he had discerned would be helpful for the person to hear in light of the former conversation. And in both cases, it happened—God came down on the conversation!
It was as if God Himself had stepped down onto the street beside us.
The focus shifted from my words, from the gospel tract, and from any of my conversational attempts, to the words in the Bible itself. In both cases conviction came down upon the listeners. They suddenly became attentive and submissive to the words of God’s Word. It was beautiful to see!
We experienced this with Wilma two Thursdays ago. She had indicated that she had a relationship with Christ, but the conversation was going nowhere. D. J., however, showed her 1 Corinthians 6:19-20:

“Or do you not know that your body is the temple of the Holy Spirit, whom you have from God, and you are not your own? For you were bought at a price; therefore glorify God in your body and in your spirit, which are God’s.” 1 Corinthians 6:19-20.

The Holy Spirit came down and anointed those words, and we felt the presence of God. Wilma received D. J.’s admonition from God’s Word and he prayed for her.
We met A J. this past Thursday. Seeing that we were Christians, A. J. was aggressively asking us for money. D. J. opened his Bible to James 2 and read:

“But someone will say, ‘You have faith, and I have works.’ Show me your faith without your works, and I will show you my faith by my works. You believe that there is one God. You do well. Even the demons believe—and tremble!” James 2:18-19.

After D. J. read verse 18, A. J. said, “That’s what I’m talking about!” But D. J. kept reading. Verse 19 contained the warning. D. J. showed him that the important thing was not just believing, but living out that belief. A. J. was immediately humbled by the words of the Word of God. He said, “Now that’s true! I know that’s true!” Apparently, God revealed to A. J. that he was not living out the faith that he claimed. His immediate humility was remarkable. We prayed for him on the street outside the liquor store.
In both cases, in the hallway of an apartment building and outside a liquor store, God’s presence came down. When the Bible was opened and the words of God were read, His presence was definitely felt.

“For the word of God is living and powerful, and sharper than any two-edged sword, piercing even to the division of soul and spirit, and of joints and marrow, and is a discerner of the thoughts and intents of the heart.” Hebrews 4:12.

Posted by Dr. Tom Johnston at 7:54 AM No comments: